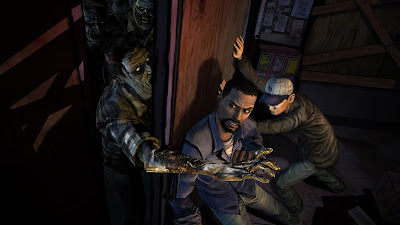 Telltale's latest episodic game, The Walking Dead, is scheduled to be released tomorrow April 24th for PC, Mac and Playstation 3 via PSN. Entitled 'A New Day', this first episode (of five) will cost $4.99 on the Playstation Store with the entire season being available for $19.99. This saves you $4.99 off the total season price, if bought separately, and it also nets you an exclusive PS3 premium theme. PC and Mac users can pre-order the entire season for $22.49 which is a 10% discount (original price $24.99). This also enters you into the Walking Dead Join The Cast Pre-order contest were one lucky winner can become part of the game.

Telltale Games is giving you some more incentive to pre-order The Walking Dead game.  For an additional $20 you can get their Almost Everything Pack which includes games like Sam & Max, Back to the Future and Jurassic Park to name a few. With eight games in total the cost comes to $42.49 which is a steal compared to the $89.99 it normally goes for.

Fans of the comic and TV show will have something special to look forward to tomorrow; just remember conserve ammo, aim for the head and avoid loud noises.