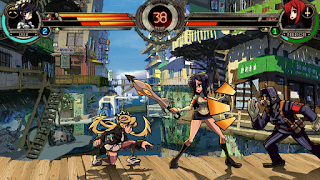 Hand-drawn sprites, a fast 2-D fighter, unique characters and crisp controls combine to create Skullgirls. As a game that takes cues from other games how does it compare. Here's what the critics had to say.


While light on content, the core play in Skullgirls works beautifully on numerous levels. Astounding animation dresses up its solid basics and the roster provides plenty of possibilities for strategies and play styles. And for those looking for real competition, both local and online multiplayer run smoothly.


One can only hope that Skullgirls meets a warm reception from the fighting game community and prospers in the years to come.


But as good as it looks, the art is just Skullgirls’ window dressing. While there aren’t a lot of characters or other modes, it’s a very deep fighting game that will keep even old hands pleased and occupied. If you don’t mind spending more than your share of time in practice mode, Skullgirls could just become one of the better fighters you’ve played in a while.


Skullgirls is the end result of some guys getting together and deciding to make a fighting game, and I respect it for that. The people at Reverge Labs have been knee-deep in the competitive fighting scene for a long time, and if there's one single trait that I find lacking in modern life, its the capacity for aspirational thinking. When it comes down to it, though, Skullgirls should have spent another year in development. What we got is good for what it is and will adequately fill a very niche void for serious fighters pining after a non-Blazblue Guilty Gear methadone, but it could have been so much more


Unfortunately, the game lacks some of the modern conveniences in other fighters. Spectating support is one, which the game works around by restricting room size to only two combatants. Replay support is also absent, which is especially unfortunate since observing others is an excellent way to improve your own skills. Still, at the oh-so-attractive price of $15, Skullgirls is a great value. Its strong fighting system can stand toe-to-toe with genre regulars, while the lessons taught in the tutorials should be adopted in all fighting games. There's plenty of fun to be had with the lovely ladies of Skullgirls, as long as you don't mind a little jiggling along the way.


As a downloadable title featuring the bells and whistles that many retail fighters are lacking, Skullgirls is an impressive feat. Hardcore fans of the genre should find a lot to love, but more casual fighting fans may not have the same appreciation for the game’s intricate mechanics. The barrier for entry isn’t high enough to significantly hurt the game’s entertainment value. Regardless of your level of experience, Skullgirls is a solid fighter that’s more than welcome on XBLA and PSN.