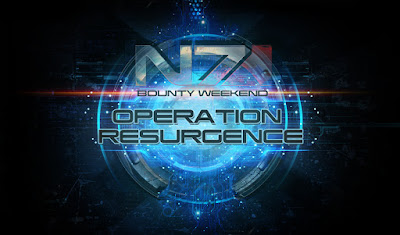 The next operation for Mass Effect 3 is about to begin. BioWare recently released the Resurgence Multiplayer which includes several new classes, weapons and maps. To go with this release this weekend's event will be codename RESURGENCE. All participating squads in this event will earn +10% experience when playing on the new Firebase maps: Hydra and Condor. In addition if you play this weekend you'll be rewarded with a Reserves Pack which contains one of the new class characters.

This operation is only for XBOX360 and PC user and will run from Friday, April 13th at 5PM PST and ends Monday, April 16th at 5AM PST.
BioWare EA mass Effect 3 multiplayer event operation: resurgence pc Xbox 360