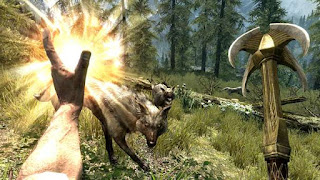 Yesterday we talked about maybe hearing news on the Skyrim DLC next week; today players of the Skyrim PC game have discovered a few more DLC clues. After finding their way into the Skyrim update 1.5.26, they discovered a folder called "DLC01"--subtle I know. What they found within seems to be assets for Snow Elf characters and crossbows, additionally there appeared to be files pointing to new vampire animations.

For all we know this could just be for the PC version of the game but for now it best now to look too much into this until we get some kind of confirmation.