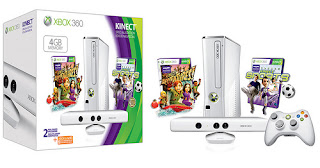 Just when you thought Microsoft didn't have any plans for another special edition console they throw another your way. Microsoft has released an all White Xbox 360 Special Edition Family Bundle. This bundle comes with a white Kinect, a 4GB Xbox 360 and a controller. It also comes bundled with Kinect Adventures, Kinect Sports and a 3-month Live Gold subscription for $300. If you're a fan of this new all white look the bundle is already up for grabs at various retailers.