- January 02, 2012
I want to start a weekly series of discussion post where a topic is picked and we have an open discussion of our thoughts and opinions. I have a few topics in mind but I open the floor to suggestions.


In the video game industry, today's games usually have several modes unique to them. Two of those modes, single-player and multiplayer have become a norm for most game. Single-player is all about experiencing the story behind the game, watching beautifully rendered cut scenes and getting to know the main character(s). Multiplayer on the other hand is all about interacting with multiply players across the world while adhering to the game world and mechanics. There are a variety of different multiplayer game types, players may individually compete against two or more human contestants, work cooperatively to achieve a goal, or engage in a game type that incorporates any combination mentioned above.

In the past few years the line between the two modes have started to blur, you can see games with co-operative single player and story based multiplayer. The problem arises because some players prefer multiplayer to a single-player and vice-versa. I see the appeal of multiplayer, it's an effective way of lengthening the life of the game while providing a form of leisure activity. However, does single-player suffer when multiplayer is included?, the argument can be made for and against this point. 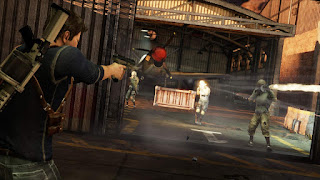