This Week In Releases 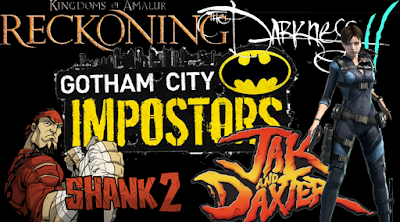 After the gates were open last week following the releases of FFXIII-2, NeverDead and Soul Calibur V the industry is kicking into high gear. The reprieve that occurred in the beginning of the year is now over. This week we see high profile releases such as Kingdoms of Amalur: Reckoning, an action RPG, The Darkness II, a FP Action Shooter, Shank 2 and Resident Evil: Revelations. Some of the others game that will be released this week include Gotham City Impostors, Fallout: New Vegas - Ultimate Edition and the Jak & Daxter HD Collection.

Now that's quite a list of great games, there's something for everyone. Kingdoms of Amalur has to potential to keep you occupied for months but with each week offering something new you'll soon be juggling multiple titles.
3DS FPS PS3 rpg survival horror weekly releases Xbox 360