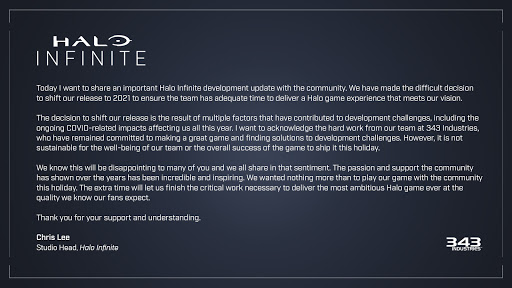 In a move that I didn't see coming at all, Microsoft and 343 Industries have decided to delay the release of Halo Infinite into 2021. Halo Infinite was slated to be one of the titles available within the launch window of the Xbox Series X and marks new direction for the Halo Series.
Studio head Chris Lee sites development challenges including the current COVID pandemic among other factors.
What does this mean for Microsoft and 343 Industries? Well I'd say it's not a good thing. Looking at the current list of games for the Series X launch window there's no killer game, no system seller--so to speak. Halo Infinite was supposed to be just that, but with that now being pushed to 2021 Microsoft may have just shot themselves in the foot. That's just my opinion; I don't see Microsoft moving consoles without a game that will really pull gamers in. They've been pushing Game Pass hard but is that enough to have gamers go after the Xbox Series X?
Only time will tell. The Series X will be released this holiday season.
Courtesy of Games News Network
343 industries halo infinite Microsoft